Richard Mitchelson is originally from Yorkshire, Britain's Cycling heartland, but is now based in the South Downs. He now creates animation, illustration, and design for clients such as: Rouleur Magazine, Oakley, Mark Cavendish, Team Sky Pro Cycling, British Cycling, The Global Cycling Network (GCN), Eurosport, Howies, Strava and Evans Cycles. He has worked with Rouleur Magazine since 2009 when he created his first comic strip about the 1974 Giro. Since then he has documented famous races and cyclists using his simple, bold, clean style. His main inspiration comes from commercial artwork of the 1950's and the fast paced, action packed, character filled world of cycle racing. When not drawing Richard can be found with his family, or on his bicycle, or running somewhere over the South Downs as a Strava Local London Influencer. 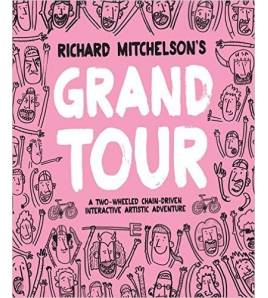