Geoffrey Nicholson was one of the most original, prolific and best-liked sports writers of the past 50 years. A modest, unassuming man, he was part of a small team at The Observer, who transformed the character of sports journalism in the late 1950s by eschewing tabloid clichés and public relations hype and introducing a quality of writing that matched, and was sometimes superior to, that on the arts and foreign pages. He was to become sports editor of the Observer and the Sunday Correspondent, sports features editor of the Sunday Times amd rugby correspondent of the Independent. Geoff’s main interest was cycling, and he covered the Tour de France for 20 years. He has the distinction of being the first editor to publish a sports picture by Eamonn McCabe. Geoffrey Nicholson died in August 1999. 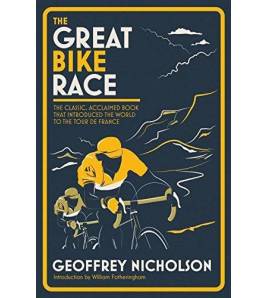 The classic, acclaimed book that introduced a nation to the Tour de France